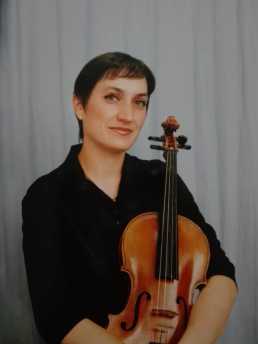 During her studies she took lessons with  K. Kashkashian, P. Oundjian and many other masterminds of viola and ensemble teaching. Being  appointed  as soloist/concertmaster in various ensembles and orchestras she has been touring in Armenia, EU, USA, Canada ,Australia, Russia, Middle and Central East.
Since 2007  she contracted  with Lebanese Philharmonic  Orchestra (LPO)  as viola section leader. In addition, she has performed as soloist viola concertos by Bartok, Bruch, Weber  etc...
In 2015 Anna was chosen to be part of the Armenian World Orchestra with 50 other best musicians of Armenian origin for the concert of the 100th year Commemoration  of the Armenian Genocide, which took place in Paris under patronage of Presidents of Armenia and France.

In 2019  she performed  critically  acclaimed  premiere of Dr. Naji Hakim's Fantasia  for Viola and Piano accompanied by the composer and she is honored to be the dedicatee of this wonderful piece.