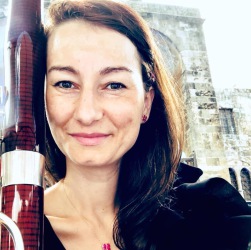 I was born in February 1983, in the city of I.L.Karagiale, of the architect Toma Socolescu, and of the great writer Nikita Stănescu, who stated that "Music is an answer to which no question has been asked", a confirmed certainty that humanity has and will have need for the art of music to access and reflect on the inner responses of life, and the evanescent condition of humanity.

National University of Music in Bucharest, Faculty of Musical Performance,

* Diploma of Excellence, Ministry of Education and Research 2000

* Second Prize "The Hope of a Sound" organized by Prof. Heinz Riedelbauch 2002

* Diploma of excellence offered by the Ministry of Education and Research

* Recitals during the show "Musicians of