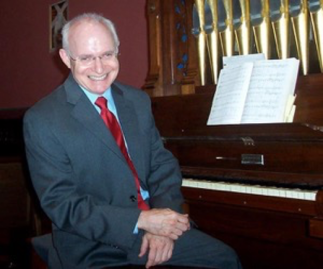 LEO ABBOTT is a graduate of the St. Paul Choir School, Cambridge, and the Chaloff School of Music, Boston. His teachers include Theodore Marier, George Faxon, Clarence Watters and Flor Peeters, in organ; Naji Hakim in improvisation, and Julius Chaloff in piano. He holds the Fellowship and ChoirMaster Certificates of the American Guild of Organists, has won first prize in several international and national competitions, and was a finalist at the “Grand Prix de Chartres” in 1984.

In 1986 he was appointed Music Director and Organist of the Cathedral of the Holy Cross, Boston. After nearly 33 years, Mr. Abbott retired from the Cathedral, and was given the title of Music Director and Organist Emeritus. Mr. Abbott has performed for conventions of the American Guild of Organists and the Organ Historical Society, and at the Basilica of Sacré Coeur, St Sulpice and Notre-Dame Cathedral, Paris, St. Ouen, Rouen, Westminster Cathedral, London, Galway Cathedral, the Basilica of the National Shrine of the Immaculate Conception, Washington, DC, St. Patrick’s Cathedral, New York, Methuen Memorial Music Hall, Portland City Hall, Harvard University, Grace Cathedral and St. Mary’s Cathedral, San Francisco, Cathedral of the Madeleine, Salt Lake City, and Sacred Heart Cathedral, Newark. He is an active member of the American Guild of Organists, the Organ Historical Society.