The music of Stravinsky has been a great influence to Naji Hakim. Although it is known that Stravinsky did not hold the organ in highest regard (''the monster never breathes !''), Hakim has transferred the style of Stravinsky to the organ, and in combining it with Gregorian chant and his own originality, has created an interesting example of what Stravinsky might have written had he not had such an aversion to the organ.

The work is presented in the form of triptyque, with movements entitled Prélude, Danse and Final. While there are no direct quotes from the Russian composer, there are hints throughout of Petrouchka, The Firebird, andThe Rite of Spring, as well as a general imitative style in composition. Large explosive chords, driving rhythms, the colorful use of tonal resources of the organ, pandiatonicism, ostinati, and deafening silences all unite to form an invigorating opus.

Unity in the triptyque is established through the use of cyclical fragments, both melodic and rhythmic. The theme of the final movement serves as a leitmotive, appearing in some guise in each of the movements. In thePrélude, the rhythmic outline of the leitmotive is heard in the introduction, accompanied in the pedal by a forshadowing of the pedal ostinato which becomes the basis of the second movement. The following section is inspired by the Litany of the Sacré-Cœur, in which one manual takes the part of the cantor, and the other the part of the congregation. The remainder of the movement is based on motivic cells from these two themes, and ends on a long-held note, the gradually-fading E.

In the Danse, the octave Ds of the pedal ostinato provide the rhythmic pulse, while a fugato based on the rhythm of the leitmotive unfolds above it. The melody of the fugato also contains a germ of the leitmotive . The rhythmic vitality of Stravinsky is called to mind. A coda based on the pedal ostinato builds dramatically to an enormous climax, followed by a Petroucha-like passage, and ends calmly in D major.

The Final, a fiery toccata, states the leitmotive emphatically at the outset, before lounching into its vigourous variations. Such Hakim trademarks as glissandi, Arabic Dances, Gershwinisms, colorful registrations and passages on the hair-parting chamades are heard throughout this breathless, unyielding tour de force, which ends with an exhilirating outburst in D major, using the tutti of the organ. A quotation from L'Histoire du Soldat, by C.F. Ramuz, reiterates the mood of the last movement : ''Un bonheur, c'est tout le bonheur''. (One happiness is all happiness.) 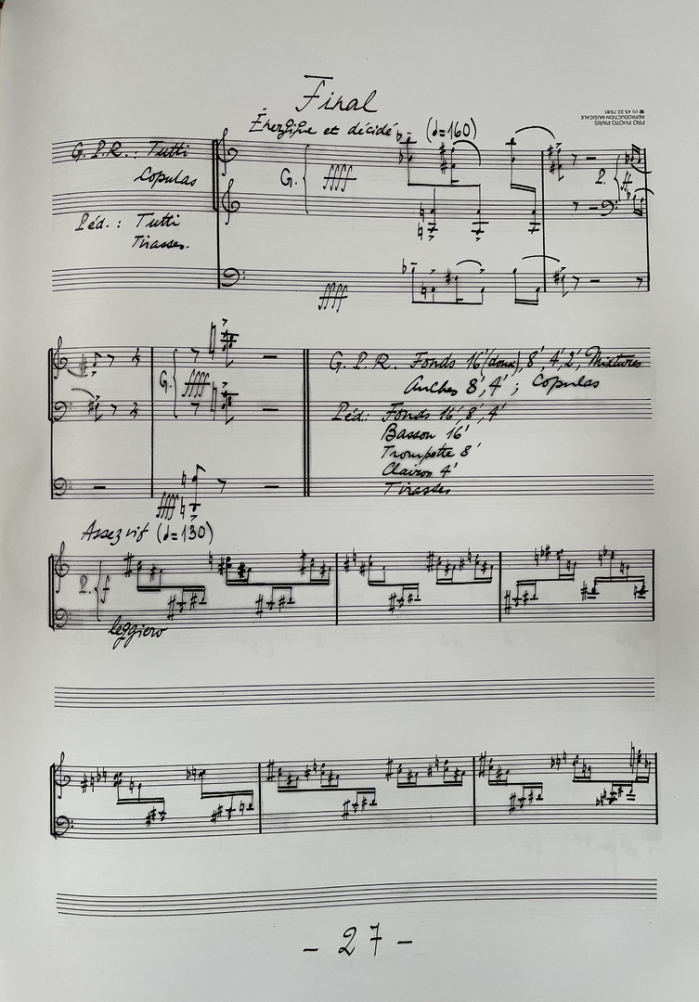